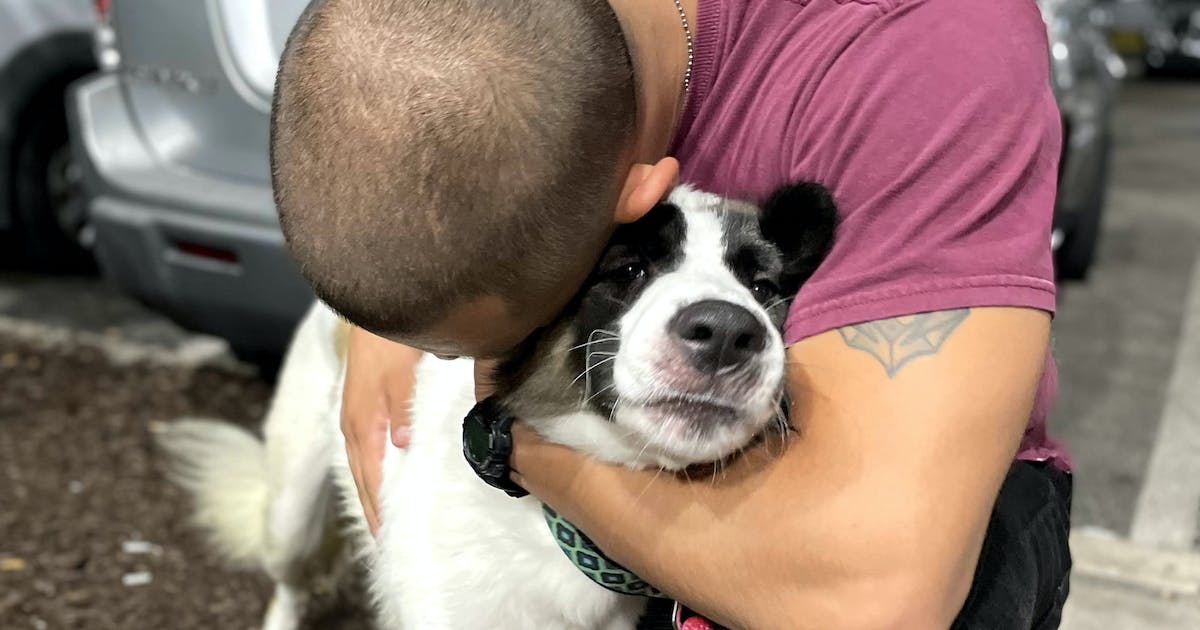 One thought occupies Madeline Jones as she looks into the soulful brown eyes of Misha, her newly adopted rescue dog that arrived from Afghanistan in mid-July.

Misha, a 2-year-old Anatolian shepherd, would have quite the tale to spin.

Born as bombs fell, the pup, her mother and nine littermates were brought to Kabul Small Animal Rescue (KSAR). The shelter provides veterinary care and permanent housing for neglected, abandoned and injured street dogs and cats endangered by the long-running war.

But this summer, with coalition forces exiting the country amid fears of a resurgent Taliban, KSAR operators feared for the stability of their shelter and the safety of the animals in their care. At the same time, the U.S. government instituted a yearlong ban on importing dogs from 114 countries, including Afghanistan.

Before the ban began, the Kabul shelter took the desperate step of shipping dogs like Misha out of the country in a quest to spare their lives. More than a dozen of them made the long journey to Minnesota.

“When we knew we needed to rehome our dogs, we sent out an alert to every U.S. rescue we’d ever connected with to help,” said Charlotte Maxwell-Jones, an American archaeologist-turned-animal activist who founded KSAR with a team of Afghan veterinarians.

That alert sounded 11,000 miles away, heard by Sally Mars, who, along with her husband, Chris, runs Mutt Mutt Engine. Their lean Minneapolis-based nonprofit holds an unusual role in the animal rescue universe.

Mutt Mutt Engine doesn’t take animals itself; rather, it supports and assists other animal welfare organizations that save dogs in need in the southern U.S., Mexico and other countries.

With the help of donors, Mutt Mutt arranges and pays for transportation to bring needy dogs to U.S. rescue groups, which prepare them for permanent homes.

Mars went into overdrive to find groups willing to take the dogs from the Kabul compound.

“I am very conscious that a nation is falling and there are bigger fish to fry than dogs,” said Mars. “If I could transport people, I’d do it in a heartbeat, but I can’t. What I can do is save what our fellow humans love ­— the dogs they raised and cared for. It’s not a small thing.”

A television commercial producer by trade, Mars is experienced at managing complex logistics. That skill came in handy as she and Maxwell-Jones worked across the globe and a nine-hour time difference on a looming deadline.

“We were sending out three or five or nine dogs at a time,” said Maxwell-Jones. “We had to be at the airport at 4 a.m. to check them in, every day for 10 days. It was insane.”

Maxwell-Jones vetted the dogs and got them to the Kabul Airport — vaccinated, permitted and with all the necessary paperwork.

That’s where Mars took over, tracking the dogs in the air, helping them to clear customs and transfer to connecting flights to U.S. rescue groups that she recruited.

“It was 10 days of being on call, with two all-nighters,” said Mars. “But the word got out and there was an amazing outpouring everyplace where the dogs landed.”

Nine of the dogs arrived late at night at the cargo gate at Chicago O’Hare. Mars lined up volunteers, including four Marines who had served in Afghanistan, to meet them, clean them, then water and walk them.

Steffany Fleming, a Mutt Mutt Engine volunteer who lives in Maple Grove, rented a cargo van in the Twin Cities and drove to Chicago to pick up the dogs for the next leg of their journey to Minnesota.

“We took turns sitting with them to let them decompress while we replaced the bedding in their crates,” she said. “I love that I could be a small part of such a wonderful big project.”

Of the 48 dogs removed from the Kabul shelter, 16 arrived in Minnesota as their final destination, taken in by three rescue organizations.

No Dog Left Behind Canine Rescue in Brooklyn Center accepted four dogs, which are currently being fostered while waiting to be adopted.

“We will absolutely find homes for them. Adopters love stories like this, being at the end of such an effort to save dogs,” said Natalie Carrier-Janey, foster coordinator for the group. “We don’t know how they pulled it off, but when you do something good for dogs, it seems like there’s always some magic that makes it work.”

Carrier-Janey described two of the Afghan dogs as friendly and two as shy, which doesn’t surprise Mars.

“Most of the dogs were born in the shelter or rescued when they were very young. They’ve lived with people and have been socialized. But some are more aloof. I know they can be shown what love is,” said Mars.

Not all of the dogs from Afghanistan will end up in Minnesota homes.

Some were brought to the Kabul shelter by U.S. service members who saw them scavenging, being abused or attacked by other dogs. The compound offered refuge to dogs still suffering from those injuries or from casualties of war or inadequate veterinary care.

“Some animals can’t adapt to a household, because of their age, disability, complex medical condition or the cruelty they experienced. Rarely are they adopted but we can give them a permanent home. It’s not conventional but they’re happy here,” said Lisa LaVerdiere, founder of Home for Life, a rare care-for-life sanctuary in the St. Croix Valley that houses 200 dogs and cats from around the world.

Seven dogs from Afghanistan are settling in at Home for Life. They include Lily, a slim dog with a rare genetic disorder that split the bones in her front paw. Lily was found by soldiers who brought her to KSAR for medical attention, knowing she wouldn’t survive on the streets.

Another dog that will live out her years at Home for Life is a solemn older female named Sultana. She was Charlotte Maxwell-Jones’ beloved personal pet.

“When Sultana came to us in Kabul, she was almost dead. We thought she’d been attacked by a dog but she was covered with fleas that left her with a facial disfigurement,” said Maxwell-Jones. “She’s my girl. I wanted to have her always but I thought, if this turns into civil war, if I have to leave, it would be safer for her not to be with me.”

LaVerdiere believes Sultana, or Salty as she is now known, is making a gradual adjustment to the sanctuary.

“Charlotte would not ask us to take her if she thought things would get better. She is handing us her heart for safekeeping,” LaVerdiere said.

Mars reached out to Contented Critters, an animal rescue organization in rural Makinen, Minn., which committed to taking five Afghan dogs. They arrived at O’Hare Airport in Chicago and were taken by van to the Iron Range rescue.

“I was thinking, ‘What will they be like? What kind of manners will they have?’ I can tell you they’re super nice dogs; you would never know what they’ve been through,” said shelter director Hailey Worth. “They have these nice sad faces, good hearts. It’s rewarding to have them come all the way over here and get a second chance on life.”

When Madeline Jones looked at pictures of the new arrivals shared by Contented Critters, she spotted Misha and immediately felt that she’d found the best friend she’d been seeking.

A recent high school graduate, Jones, 18, wanted “a dog of my very own” to join her family on their farm outside Superior, Wis. Misha is timid, Jones said, still hanging back and only slowly inching nearer to be petted.

“Some people might not want a dog that’s scared, but I’m patient. She’s so beautiful. I will give her all the time she needs,” Jones said. “She’s got the right personality for me; I’m shy, too. She’s already my dream dog.”

Despite such heartwarming successes, there were 21 dogs that were too young to travel or came in too late to get vetted and vaccinated in time to beat the deadline to get out of the Kabul shelter. They’ve been left behind and their future is uncertain, as is the fate of the clinic itself.

“People from different ideologies and walks of life came together to make this happen and I’m not giving up hope that we can do more,” said Mars. “I’m very tenacious. If there’s no solution it’s because someone hasn’t thought one up yet. I’m already on it.”

Kevyn Burger is a Minneapolis-based freelance broadcaster and writer.

You have limit - count - 1 articles left