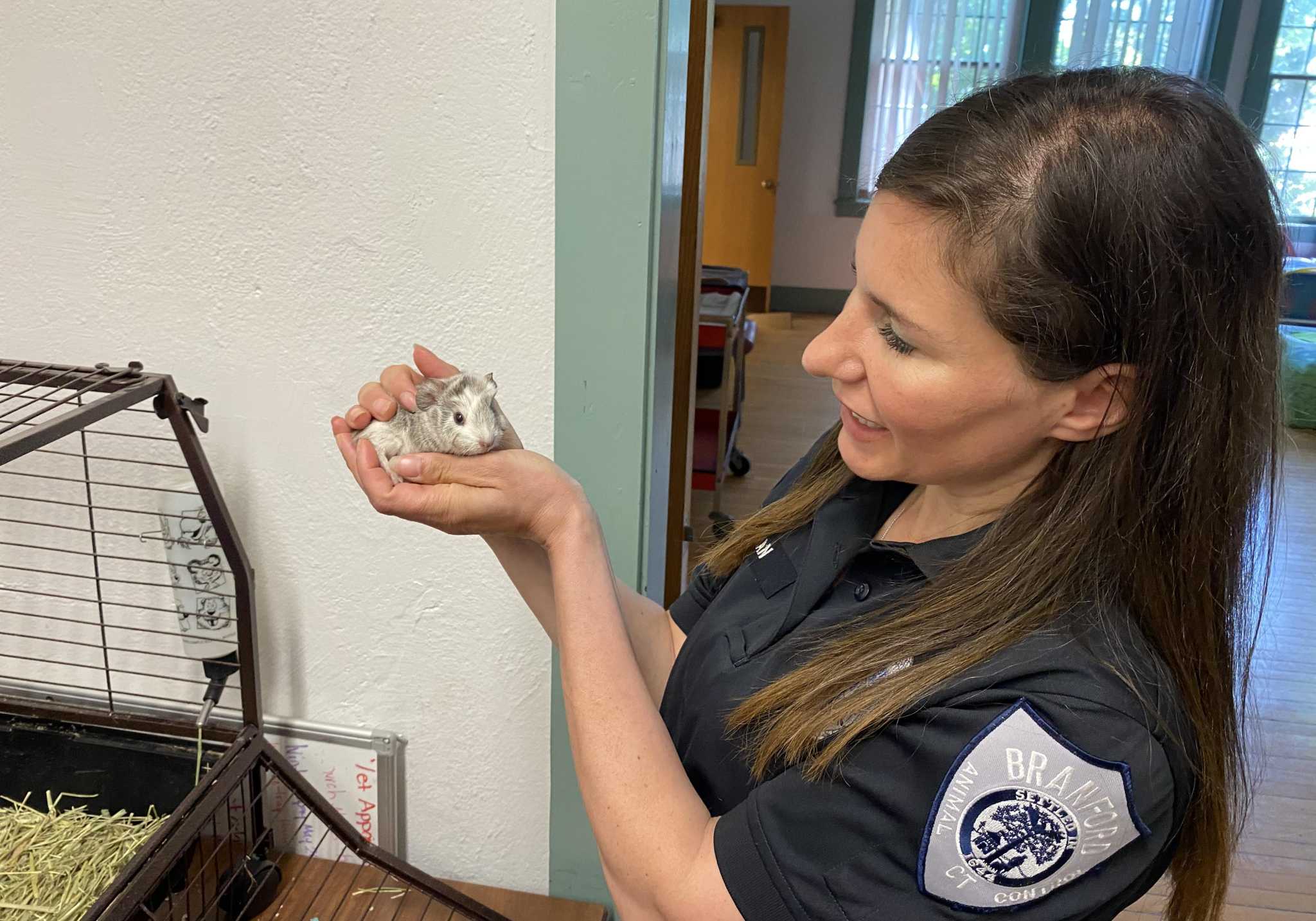 BRANFORD — Miss Piggy is leading her five babies, born June 12, around the cage, while Hamilton and Hamlet, one of which is the dad, are across the room. Pig Newton, father to her first litter, has a cage to himself.

You might get the idea that this is a pet store or a farm, certainly not an animal shelter that houses dogs and cats.

But you’d be wrong. The animals in this convoluted family saga are guinea pigs, and they are among the current residents of the Dan Cosgrove Animal Shelter. It’s not your average shelter.

“The babies don’t have names yet because we don’t know if they’re boys or girls,” said Dawn Buffone, one of the shelter’s animal control officers. “When Mom came in, she was humongous.”

Five is a large number for a guinea pig litter.

It all started when the pet store told the guinea pigs’ owners that the pair they were buying were both females. Oops.

And the babies are instantly recognizable. “It’s amazing how when they come out, they’re guinea pigs,” not hairless rodents, said shelter Director Laura Burban. “Poof! You’re a guinea pig!”

While most kennels and animal shelters focus on cats and dogs, Burban said the Cosgrove shelter, which serves Branford and North Branford, is one of the few that will take in exotic pets, which include anything that is not a cat, dog or farm animal.

Right now, besides the guinea pig clan, the towns’ animal control officers are looking after three chinchillas — Dorothy, Blanche and Rose after “The Golden Girls” — a ball python, several mice and a rabbit, along with three-dozen cats, which have their own room.

Two more cats, Mary and Trouble, live in their own offices in the Canoe Brook Center, the shelter’s temporary home while the Cosgrove shelter at 749 E. Main St. awaits a $1 million renovation and expansion. Both appear to have suffered trauma or abuse, Burban said. All the dogs have been adopted out, but the kennels are available if needed.

They recently also housed sugar gliders, a small relative of the opossum. But those have returned to their family, which asked the shelter to keep watch over the marsupials after their Short Beach home was damaged in a fire. Burban and her staff will do the same for people going into the hospital.

Burban said the shelter has been taking in all kinds of domestic animals since it opened in 2003. “They are living creatures, which experience emotions — happiness, pain and loss,” she said. “We believe that they all deserve respect and to know they are wanted.”

Burban, who has directed the shelter for 13 years, said it was not surprising she would end up caring for animals. “I was rescuing animals since I was 4 years old,” she said.

Some animals come to the shelter because they’ve been rescued. Others were pets surrendered by families because the novelty wore off, the kids lost interest, or the animals were too difficult to care for, staff said.

“I think that a lot of people buy these creatures as a spur-of-the-moment thing, and then they realize, ‘I don’t want a cage in my house,’ or, ‘they’re going to pee and poop in their cage.’” Or a family bought a bunny in January for their daughter, “not realizing she was going to college in August. We get a lot of that,” Burban said.

Wendy Joyce, Branford’s longest-serving animal control officer at 35 years, said “everything’s changed” about caring for animals since she started. “It was a lot quieter back then. It wasn’t as hectic,” she said. “I feel like people today compared to years ago are just not as responsible.”

How do they know how to care for so many different animals?

“You learn as you go,” Buffone said. She took a wildlife training class recently. “If there’s a training class we want to take, the town’s very supportive of it,” Burban said. The Cosgrove shelter also has been supported by 200 volunteers, though they haven’t been able to help out since the pandemic began.

Buffone not only tends to the “critters,” as they call them, but also goes out to rescue wildlife when called upon. “I had a baby deer. We had a woodchuck, a squirrel and there was a raccoon in the sewer. But the raccoon was OK, so we let him be,” Buffone said.

“Rescuing” a fawn on the side of the road is not a good idea if it doesn’t appear to be in trouble, Buffone said, because its mother likely is close by and knows it’s safe. “She leaves them somewhere safe and she’ll come back to them,” she said.

“We had a squirrel case this year where someone thought the babies were rabid and trying to attack their family,” she said. “They’ll typically come up looking for help if they’re babies. People should not touch them; they should call their local animal control.”

Burban said there seems to have been more wild animals needing rescuing this year, perhaps because people are at home more during the pandemic and seeing them, or because it was a relatively mild winter.

The shelter doesn’t limit animals to four legs. “We get macaws,” Burban said. “I actually have a parakeet coming in. It’s a blind parakeet.” And a coop has been built behind the center, awaiting nine chickens and two ducks that are expected soon.

“Because we’re one of the only shelters who take these kinds of creatures in, we get a lot of calls for resource guidance,” Burban said. More such calls are coming in from people who adopted a pet during the pandemic and now don’t know what to do because they’re going back to work.

Some calls reveal how little the owners know about training their pets. One caller said, “I can’t get my dog to go to the bathroom outside. It’s still going inside,” Burban said. “Some people don’t know what to do, so they get frustrated.” The staff offers guidance and points to available resources, “taking them step by step through the process and teaching what they should be doing.”

“I think a lot of people are afraid to call because they’re afraid of being judged,” Burban said. But the animal control officers welcome all calls. “We don’t want them just abandoning them or giving them up,” she said. “The best thing to do is to reach out for help, so [we] take the time to make it work.”

A recent post on the shelter’s Facebook page described that day in which Buffone was called to help a fawn, a raccoon, “a gaggle of turkeys acting like they own Burban (Drive) and a disoriented young ground hog.” That was also the day Miss Piggy gave birth.

The post continues: “And the emotional part (if that wasn’t all enough) Dawn received a distress call from Lakes Veterinary Services that a 90 year old husband and his 90 year old wife who are residents of Branford had a 12 year old very large German shepherd who couldn’t walk any longer and was very sick. The dog needed to be put to sleep but they couldn’t move him and were extremely upset. ACO Dawn headed to their house and comforted them through this terrible loss. Through tears, she assisted with getting the dog to the vet to say their final goodbye and then Dawn checked in on them later to ensure they were ok.

“We tell you all of this, not because Dawn needs the good job pat on the back, but because this is the important work that these animal control officers for Branford and North Branford do.”

Once the Cosgrove shelter is complete, “we’ll be able to have a lot more educational programs there because we’ll have space,” Burban said. “We have taken the position that education is one of the most important things that we do. We just feel like one of our biggest roles for the communities is to educate them.”

A fundraising gala for the new shelter will be held at 6 p.m. June 24 at the Pine Orchard Yacht and Country Club. Tickets start at $125 and can be purchased at https://p2p.onecause.com/cosgrovesavinglives/home. For more information, email Burban at lburban@branford-ct.gov.