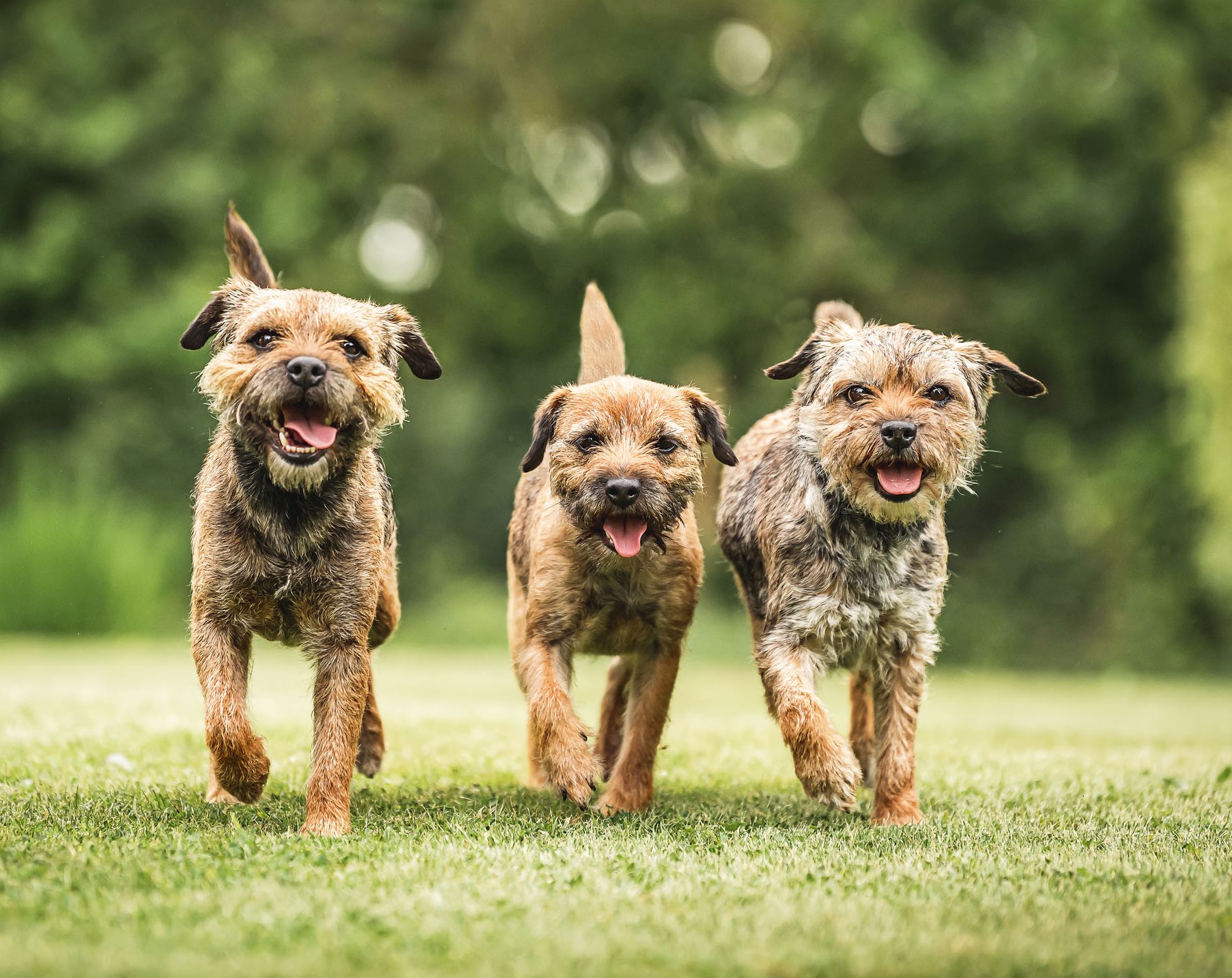 The Border terrier has it all: bags of character, endless energy and yet small enough for cuddling on the sofa. Katy Birchall finds out more.

In the summer of 2019, Lorraine Kelly invited 100 guests and their dogs to join her at London’s ITV studios in a bold attempt to break the Guinness World Record for the most dogs sitting down simultaneously for 30 seconds.

The presenter’s Border terrier, Angus, was naturally a principal focus for the cameras. ‘Of course, all the dogs did it beautifully and sat down together,’ Lorraine recalls. ‘That is, except for Angus, who stubbornly refused to sit until the time was up. That was when he plonked himself down on his bottom with a cheeky grin.’ 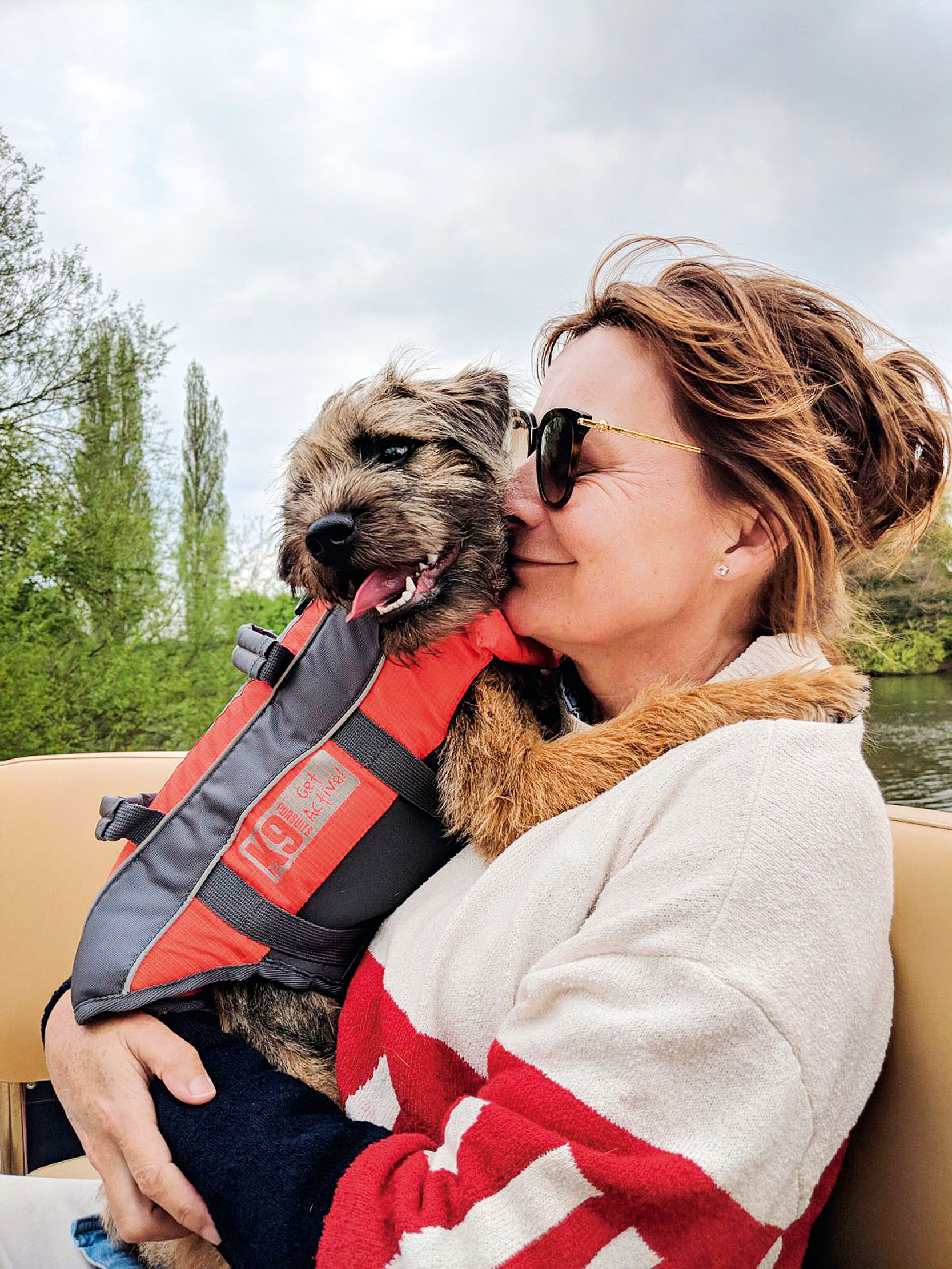 This brazen mischievousness is a charming quality of the Border terrier, one of many that has won the breed a legion of devoted fans. Energetic, affectionate and full of character, this hardy little dog has a nose for adventure and the courage to follow it. Not to mention its fetching good looks: intelligent eyes, V-shaped ears, an otter-like head and that quizzical expression — it may not appreciate the compliment, but the whiskery Border is nothing short of adorable.

Lorraine was introduced to Borders 16 years ago, when her cameraman husband, Steve Smith, was working on the television show Vets in Practice. ‘He asked the vets what breed they would recommend. We wanted a little character that would need lots of exercise and bring joy to our lives — they all told us to get a Border terrier.’

Their first, Rocky, was ‘an absolute delight’ and, when he passed away six years ago, the family was devastated. ‘We waited until 2017 to bring Angus into our family and he is now the beating heart of the house,’ she says fondly. ‘Borders are clever and funny, but also gentle and wise — I adore their curiosity, loyalty and fearlessness.’

It was the breed’s active nature that caught the eye of former tennis world number one Sir Andy Murray, who has two Borders, Maggie May and Rusty. ‘My wife, Kim, and I wanted dogs with lots of energy,’ he explains. ‘We both enjoy walking and the countryside, so they give us a reason to get out every day. They are great family dogs — we have four young children and both dogs are very gentle with them, despite having to put up with a lot.’

A quick glance at the two-time Wimbledon champion’s Instagram profile confirms his devotion to these plucky terriers — dotted among the tennis images are heartwarming snaps of him relaxing at home with his dogs. In 2012, Maggie May and Rusty delighted the nation when a picture popped up on social media of the two wearing his Olympic medals.

‘They’re inseparable,’ Sir Andy admits. ‘Everywhere one goes, the other isn’t far behind. They’re also incredibly versatile. If we want to chill out, they’re the perfect size to cuddle up with on the sofa, but if we want to go on long walks or play in the garden with the kids, they have the energy of 10 dogs.’

“They’ll take as much exercise as you can give them. Rosie, my 17 year old, will still walk a mile and a half most days”

Bred in the 18th century, when farmers and shepherds needed game little working dogs to help root out vermin, the Border earned its name from its association with the Border Foxhounds — running miles all day with the hunt, the daring terrier was relied on to bolt a fox that had gone to ground. In 1920, the Kennel Club (KC) recognised the breed and it began to grow in popularity, its working characteristics passionately protected by its devotees — the official breed standard still reads ‘essentially a working terrier’. An article on Borders appeared in a 1930 issue of The Field, stating, ‘gentle and affectionate in the home, they delight in waging war on foxes, badgers or any sort of vermin that are the hereditary foes of all the terrier tribe’ — the piece was fittingly titled ‘Little Warrior Dogs’. 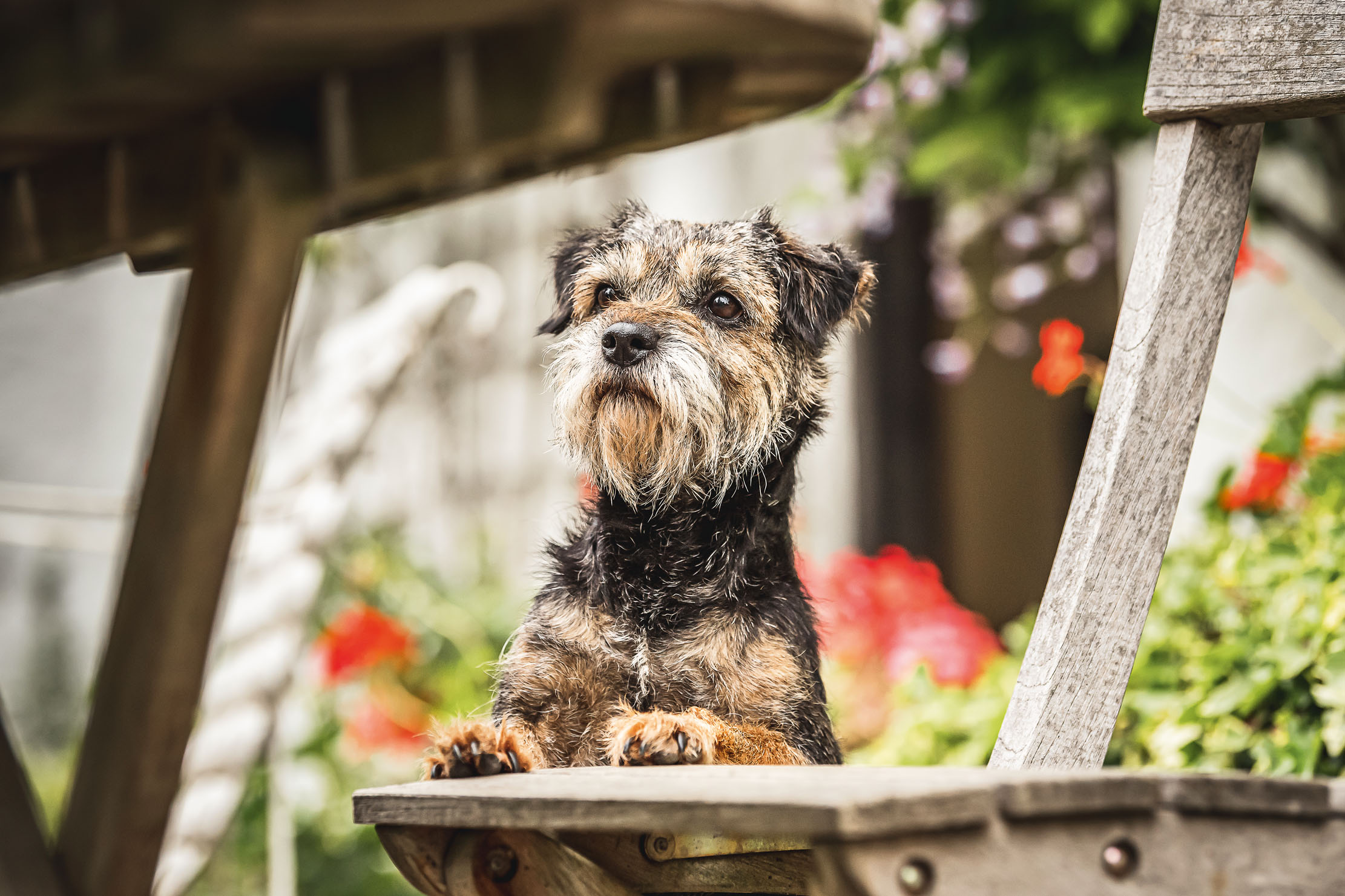 ‘Borders were originally working dogs,’ emphasises Tony Wrenn, chairman of Border Terrier Welfare (BTW) and owner of four examples of the breed. ‘Once they’ve decided they’re going after something, they don’t stop — it doesn’t matter how good you think your recall is — and they’ll take as much exercise as you can give them. Rosie, my 17 year old, will still walk a mile and a half most days.’

Mr Wrenn first fell in love with the breed in the 1970s, when he offered to do some dog-sitting. ‘My ideal of a dog in those days was something fairly substantial, so I wasn’t exactly comfortable with the idea of being seen out and about walking my friend’s strange little terrier. But, after two weeks, I was extremely reluctant to give it back,’ he laughs.

“A secure garden is essential for Borders — if they get on the scent of something, they’re off.”

As BTW continues its tremendous work rehoming terriers in need and providing support for owners, Mr Wrenn highlights the importance of researching breeds before you buy. ‘In some respects, Borders are their own worst enemy, because they look so cute, but they can have some serious attitude,’ he cautions.

‘Anyone who knows anything about terriers will be aware they have a tendency to be on the feisty side. Borders have a huge prey drive, which can be challenging. Potential owners should know that they do like a bit of mischief.’

They can also be in the habit of performing Houdini-like escapes, something Ronnie Irving, president of the Border Terrier Club, knows all too well. Alfie, one of his six Borders, has often embarked on unauthorised quests from home. ‘He jumped over the fence on one occasion and they can get under fences, too, if they have long enough to dig,’ Mr Irving sighs. ‘A secure garden is essential for Borders — if they get on the scent of something, they’re off. We’ve had to put in new fences to Alfie-proof the place. Once, the bin men picked him up about a mile away.’

Mr Irving’s grandfather got his first Border in 1923, opting for the local breed when he worked as a station master at Riccarton Junction, a remote village in the Borders with no road access.

‘I didn’t really have the option to not be involved with Borders,’ Mr Irving admits. ‘My father bred, showed and judged the breed, as did my uncle. I met my wife through them, too — her mother founded the Dandyhow Border Terrier kennel. Borders brought us together.’

“Borders are lovely, hardy and faithful… [but] there’s only a degree to which you can train them, which I find rather endearing“

They are an appealing dog, he adds, because they’re robust, a handy size and they haven’t been exaggerated: ‘They are a pretty natural breed, relatively free of inherited health problems.’

This sentiment is echoed by vet Stephen Penrose, of the Penrose Veterinary Group in Essex, whose dog, Mischa, is his second Border. ‘They’re very well-put-together little dogs; they don’t come with any abnormalities bred into them,’ he enthuses. 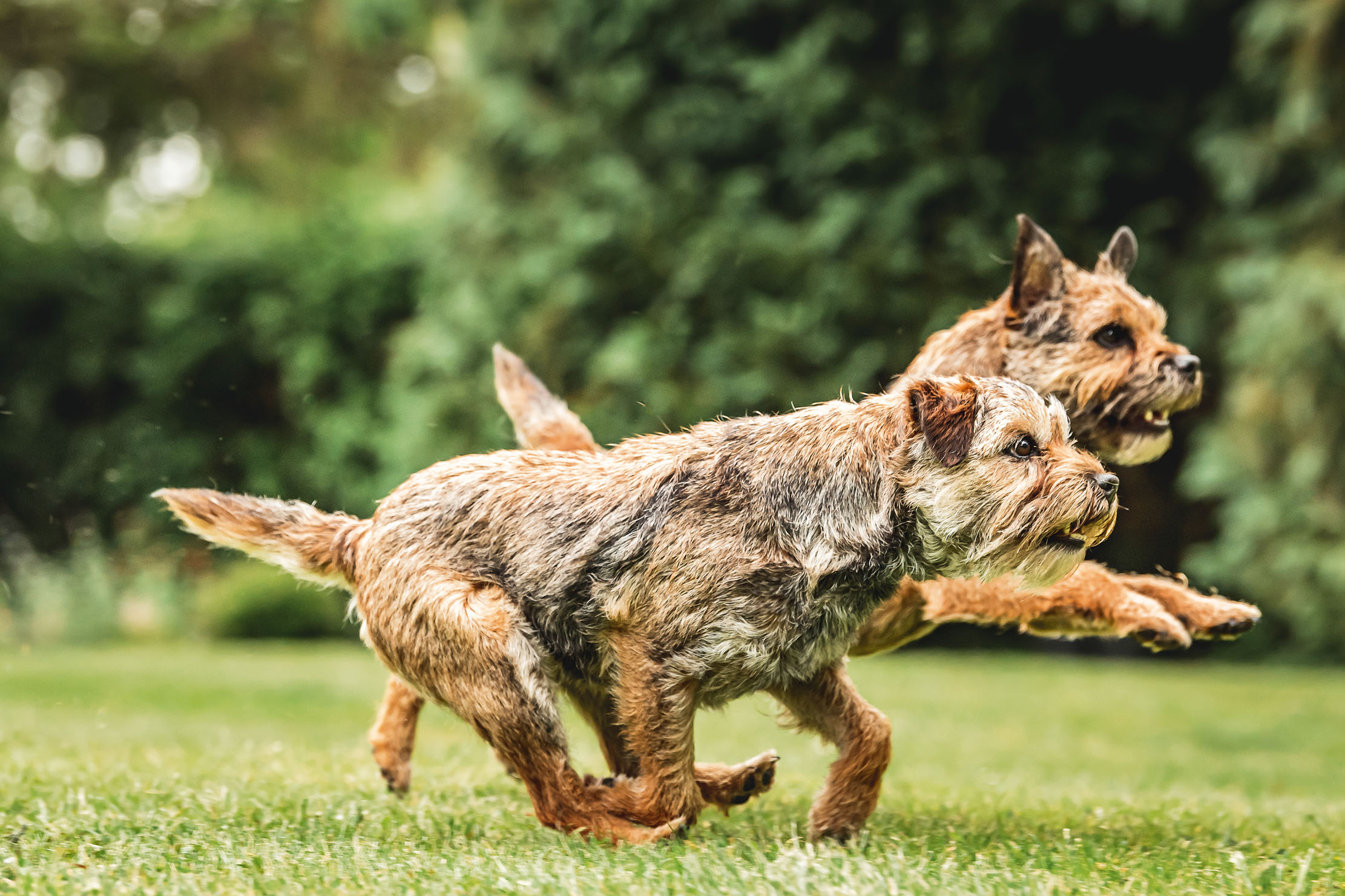 Having grown up with retrievers, Mr Penrose assumed he’d end up with one, but when he was called out to a Border having trouble giving birth, he mentioned to his wife that it was a breed worth considering due to its excellent temperament. ‘Later that morning, she called me at the surgery to inform me she’d spoken to the owner of the Border I’d helped and had bought one of the pups,’ he laughs, now a fan of the little dogs for life. ‘Borders are lovely, hardy and faithful; they have such presence. There’s only a degree to which you can train them, which I find rather endearing.’

Border terriers are happily low maintenance, although it’s worth noting that their coats should be stripped roughly twice a year. Miss Kelly reveals that Angus can be prone to dry skin, but a healthy diet has improved things. As the star of the television advert for tailormade dog food company Tails.com, he looks suitably glossy on screen — funnily enough, crunching his bespoke meal for the cameras was one command he was happy to obey. ‘He always cheers me up. I honestly don’t know what I’d have done without him during these strange times,’ the presenter concludes. ‘There’s nothing quite like coming home to his enthusiastic welcome.’

They’re one of our most vulnerable native breeds – but what Glen of Imaal terriers lack in numbers, they make

No need to scroll down: we can confirm that the Golden Retriever is indeed on the list below.
Credit: Getty Images/Image Source

Those who grew up with dogs probably already know which breed they want to own, and have done for years.

Here at Country Life we (unsurprisingly) discuss a lot of four-legged friends. Here are our favourites from 2019.

Our columnist tells a sad tale which brings to mind his own pain at losing a pair of dogs, who

Get a puppy and your life will never be the same again – but not always in the ways you’d imagine.