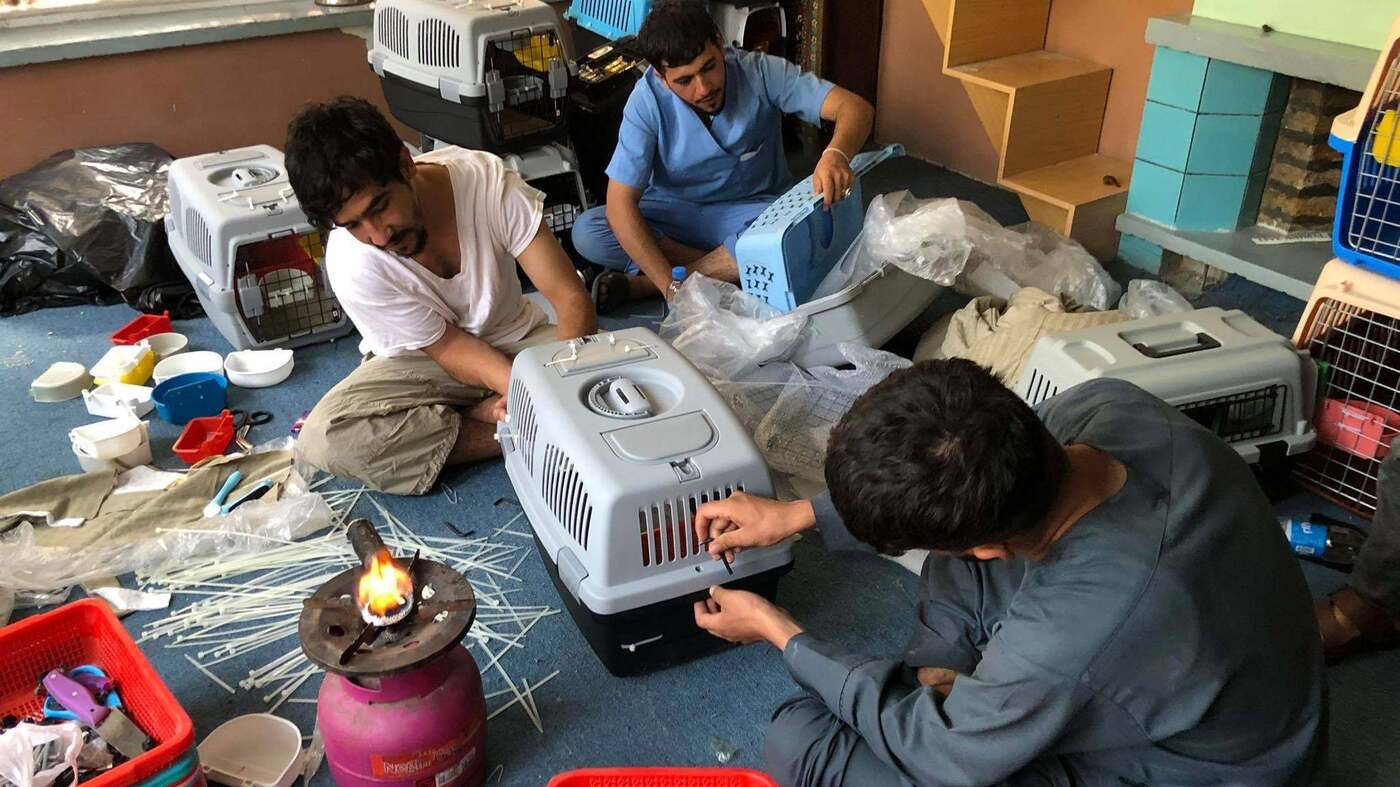 Staff members at the Kabul Small Animal Rescue are working to put together travel crates so the organization’s dogs and cats can safely be evacuated out of Afghanistan.


The staff at the Kabul Small Animal Rescue has been working around the clock to pull off what feels like the impossible.

The mission? Fundraise at least $1.5 million for a cargo plane that can airlift more than 200 dogs and cats, the rescue organization’s staff, and their families out of the capital safely — all in less than a week and while the Taliban are breathing down their necks.

The group is rushing to beat the Aug. 31 deadline for the withdrawal of foreign troops from Afghanistan. If the staff is still on the ground when that deadline passes, “all bets are off,” Charlotte Maxwell-Jones, the American director and founder of the Kabul Small Animal Rescue, told NPR.

She is unsure what the state of air travel will be after that point or whether anyone would be able to leave the country.

The organization still needs travel crates and food for 120 dogs and 100 cats that are expected to be flown out of Kabul. They also need the proper permits and visas required to travel and land with animals in another country.

The group had raised more than $700,000 as of Tuesday morning, Maxwell-Jones said.

Constantly skyrocketing prices for flights are adding pressure to the situation. Maxwell-Jones said a flight on a cargo plane to Jordan a few days earlier cost $300,000. By Tuesday, the price was more than $800,000.

The rescue organization’s crew is part of a massive exodus from Afghanistan after the Taliban took forceful control of the country a week ago. What has followed has been a chaotic effort by the U.S. and its allies to evacuate citizens and to repatriate at-risk Afghans. Thousands have rushed to Kabul airport in an attempt to flee.

President Biden said the U.S. is on pace to leave by the Aug. 31 deadline, though that date has been put into question.

The rescue organization is still taking in animals in need

As part of the mass evacuation out of Kabul, Afghans and foreigners desperate to leave are departing with just the clothes on their backs and sometimes a small bag. In their rush to flee, many must leave behind their pets because evacuation flights don’t allow animals, Maxwell-Jones said.

Staff members have responded to calls from owners — including local Afghans and workers from area embassies who are rushing to the airport or who have already evacuated — asking the organization to save their pets. Other local rescue groups and defense contractors have also brought animals to the Kabul Small Animal Rescue that they couldn’t take themselves.

Maxwell-Jones, in a Facebook post Sunday, said she got members of the Taliban to agree to allow the clinic to stay open until they evacuate.

The clinic and rescue has been allowed to keep its doors open, and the staff is able to enter Taliban-held compounds to save abandoned dogs and cats.

“We are a little overcrowded right now, but we are still working to manage it all until we can leave,” Maxwell-Jones said.

A member of the staff of the Kabul Small Animal Rescue feeds the organization’s cats. Work to find and rescue dogs and cats left behind in the mass exodus of Kabul continues for the organization.

A member of the staff of the Kabul Small Animal Rescue feeds the organization’s cats. Work to find and rescue dogs and cats left behind in the mass exodus of Kabul continues for the organization.


The organization is facing pressure from the Taliban

Staff members “are very stressed out and scared,” Maxwell-Jones said. “I mean, even if we can pull this off absolutely seamlessly, they are still leaving a lot of family members. It’s very hard for them.”

The organization has faced more pressure from the Taliban in recent days.

Taliban fighters stand guard at a checkpoint in the Wazir Akbar Khan neighborhood in Kabul, Afghanistan, on Wednesday.

Taliban fighters stand guard at a checkpoint in the Wazir Akbar Khan neighborhood in Kabul, Afghanistan, on Wednesday.

On Monday, Maxwell-Jones said in a Facebook update that she had again been visited by the Taliban, this time at home by 12 armed men — one of whom was holding a grenade launcher.

The men told her she should “leave immediately” and tried to place guards in her home, Maxwell-Jones recounts in her video.

“They have said they will give us safe passage to the airport, for as large a group that we have. They have told me to leave first,” she says. With tears welling in her eyes, she adds, “It’s very obvious what will happen if I leave first.”

She said in the video that they remain steadfast in the goal to evacuate everyone and every animal, but that they still need outside aid.

“We have stuck it out this far. We are not going to leave without them.”